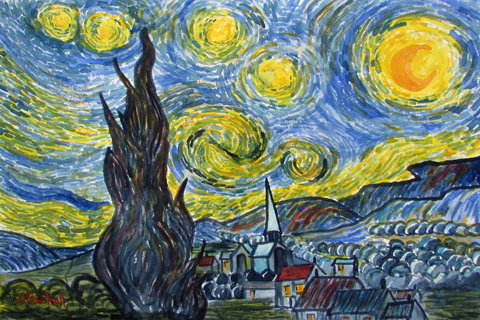 “That is the eternal question, is life all that there is of life or do we only know one hemisphere before our death? Speaking for myself I have no idea what the answer is but the sight of the stars always starts me thinking”

I have done quite a few paintings in the style of and based on the works of many old masters from yesteryear but up to now have never tackled Vincent Van Gogh. Although most of them were oil painters it was never a problem translating into watercolour as they all blended their colours to achieve a smooth finish. In some ways it was probably easier for me to get that effect with watercolours than it was for them with oils. Not so with Vincent no attempt at smooth blending with him. So why now to suddenly take up the challenge? I blame it on one of my lovely granddaughters. She and her partner are moving into their first home together and she asked me to paint one of Van Gogh’s sunflowers as a new home present. Now you won’t be too surprised that I do not have an original hanging on my wall but I consulted my art library and found a print. At first glance it didn’t look to be much of a problem but on closer inspection I realised it was not going to be so simple, in fact nothing about Van Gogh’s work is simple. The reason for that lies with the man himself. We have all heard it said that there is a fine line between genius and madness. If anyone ever proved that it was this man who constantly veered from one side of the line to the other during his short life. As an artist he is totally unique. There had never been one like him before or one like him since. He does not fit into any category or style – he just is Vincent Van Gogh. Vincent’s paintings were not just about the colours or the marks. He was painting more than a visual response to a scene – he was actually painting an emotional response to what was before him. Now my granddaughter wants a large painting. Fair enough but being a Yorkshireman I decided to try a small one first to see if I could do it. After all why waste a large sheet of paper if you can get away with wasting a small one. Looking through a selection of his paintings I decided on this one. There were several reasons. Obviously it is well known and fixed in people’s mind what a Van Gogh looks like. More importantly for me it has all the trademark colours and swirls. If I could do a half decent job on this complicated subject then I should be able to tackle the relatively simpler sunflowers.

So how to paint it was the question? You all know my mantra by now – “you can’t use too much water in watercolours and use the strength of the medium by working with large washes.” Not this time. I painted all the marks onto dry paper building it up layer by layer. Vincent often painted ‘wet on wet’ with his brushstrokes to get varying colour tones and I replicated this technique. He worked mainly in primary colours which was handy because so do I. I gleaned that he used ultramarine blue so I made this my base colour. Thus I was able to stick to my usual six colours with the addition of cerulean blue which, being semi opaque, gave me extra tones. I haven’t a clue where Vincent started on his painting or how he did it. Being an oil painter he could have worked from dark to light but I had to do the opposite and work from light to dark. So the first (very tentative) marks were the yellow swirls in the sky and I proceeded from there. I went slowly at first constantly checking the reference piece for accuracy of the marks. Gradually I developed more confidence and began to paint boldly. As the painting started to appear something extraordinary happened to me. What had started as an intellectual exercise and a test of my skill and colour knowledge with watercolours became something more. I became aware of a deep desire within me to get it right and do it justice. I painted it during three sessions but couldn’t stop thinking about it constantly – are the colours working, are the tones OK? Vincent had evoked an emotional response in me to his emotional response to the original. It took a while filling the white paper with marks instead of washes but finally it was done and I am very pleased with it.

Vincent Van Gogh is a figure of many myths but the two most common ones are easily dispelled. It is commonly stated that Vincent never sold a painting in his lifetime but actually he did…just one. Sold by brother Theo who acted as his agent, it was bought by Anne Boch, sister of the Belgian painter Eugene. It is also commonly believed that he cut off his right ear and presented it to his fellow artist and houseguest at the time, Gauguin, after a quarrel. Again not true. He cut off part of his ear and presented it to a prostitute at the local brothel and returned home to lie bleeding all night in his bed. One thing that is certain though is, despite the madness and the myth, Vincent Van Gogh is a towering figure in the history of art, an artist who altered the way art is viewed and who is still revered to this day for his unique vision.

That’s me done for today so I’ll be off leaving you to hum Don McLean’s “Starry, Starry Night” to yourself while I go fulfil my date with a sunflower. By the way if you would like a ‘Van Gogh’ on your wall my original is for sale. Just contact me for the details. Cheers, Glenn

Save this product for later

ALL OUR A3 PRINTS ARE DONE ON EPSON ARCHIVAL MATTE WITH HIGH QUALITY EPSON INKS AND ARE INDIVIDUALLY SIGNED BY US. WE AIM TO DISPATCH ALL ORDERS WITHIN THREE WORKING DAYS.

"An artist is not paid for his labor but for his vision." 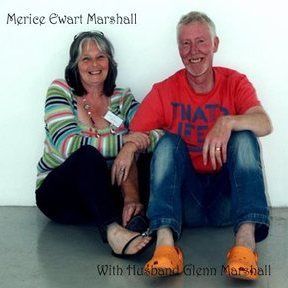 THANKS FOR VISITING OUR WEBSITE. WE ARE HUSBAND AND WIFE TEAM MERICE AND GLENN MARSHALL. WE HAVE BEEN WORKING AND EXHIBITING TOGETHER SINCE 2005. ALTHOUGH OUR STYLES ARE QUITE DIFFERENT WE ARE BOTH PASSIONATE ABOUT OUR ART